I have been holding one of my best friends in my arms tonight deathly sick. He has beat the odds so many times but we don’t know if he will make it or not this time.  This is one of my favorite pictures of Jack with is “Whatcha talking about”  looks.

Jack had a seizure tonight and scared son half to death. Son ran for me and Jack finally came round and stood up enough for us to get him into my room.  Jack has been my baby since shortly after 9-11.  He was already a big boy when we got him and so he is pretty old. This is Jack in his hut with his Scooby Doo blanket.

I have had to leave a light on because he does not want it dark and if I move and he is not touching me, he tries to get up. My heart is breaking but I also knew this day was coming. I had seen it for the past week that he was going down. He looks up into my eyes now with such trust and I tell him it is ok . There is no way to explain to him what is happening and he is content just to lay against my leg and my hand reach down and touch him.

I find myself thanking him for all the joy he has brought to me, all the tears he has dried, all the times he made us laugh with his funny antics and all the love he bestowed on us so freely. He was abused when we got him and was rescued. When we got him he did not know what a toy was or a bed. He was terrified of loud noises for the college kids that had him were shooting guns right up next to him because they thought it was funny to watch his terror. He wanted away from them so badly that when they found him, his paws were bloody and torn from digging out.  Humane Society told us they didn’t know if he would be able to be around people as he had fear aggression. We went to see him at a woman’s house who trained dogs and he came straight to me. They had told me not to touch him or anything and yet he let me rub his face and look deep in his eyes and talk to him. I said…”he was waiting for me. I want him.”

This is Jack when we got him. He was three plus years old. 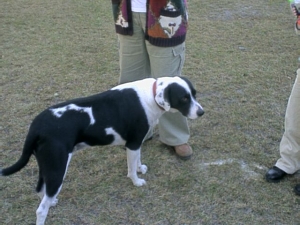 The first night I awoke to find him standing over me howling as a thunderstorm raged. I wrapped him in a blanket and held him and rocked him. This went on the first two or three years we had him. It was so funny as we lived in a mobile home and he and I would go sit in the bathroom, the one on the inside of the mobile home because it felt safer. And so when Jack heard a storm, he would head for the bathroom and if I was not following, he would stick his head out as if to say “you coming or what??”

Jack has always been happy just to be with us. This is why we have the kennel in the van. When we go to Pueblo or out to the Rio, Jack goes with us. As long as he is with us, he is content. He does not like to be left alone.

I am writing like I think he is leaving and he may be….my baby…my dear best friend. And yet at the same time I am looking at pictures of him and celebrating all the time he has had with us. All the fun things we did together and all the funny things he did. I can’t imagine life without him. Isn’t it ironic that animals with all their love and innocence and beauty live such short lives and humans…who have the ugly traits live such long ones. I think that is one question I will ask when my time comes and I get to the other side.

Jack has almost died with the vet about five times. They got where they said he was like a cat with nine lives. And since we have lived out here, he has been deathly sick about five or six times and made it. But, I have to wonder how many more times he can beat the odds. How much more can he take when he is so frail. He is already past the age for a dog of his breed but then again..age is just a number. And he has so many health problems. He has tumors and the vet before we moved told us operating would kill him. I guess he is tough like his human mama here. We keep fighting until the very last.

So, I am going to share some pictures of my Jack while I am rambling. Hope you all don’t mind.

Jack with his toy

Jack being a character

Jack with Mama. He adored her and would lay on her feet.

Jack sitting by my feet on the porch.

Now talk about rotten. His arthritis was hurting him a while back and so we had the heating pad on it. He loved it.

He is mad here cause I don’t have his good blue cape finished washing yet.

One of my favorite pictures of him in his blue cape sleeping.

And this one always makes me laugh. I was playing with him and said ok Jack, let me in. and he gave me his “how do I know you live here? Look.

And of course you would never know he was spoiled with this picture, huh. He always loves his head covered up. I crack up for when you pull the cover over his head, he starts snoring before it settles. I would tell him I knew he was not asleep and he would sleep talk to me.  This was one of the times that he got so sick from someone trying to poison him and the vet kept him with her in her office. They all loved him at the vet. He pulled through and came home weak and got very spoiled and loved on.

Our first winter here and Jack’s first experience with snow. Oh my did he love it. Now, he tolerates it. Too much arthritis. He would run with his mouth down scooping it up and then throw himself down in the snow and just roll and roll.

Jack and Sweetpea playing together. He loves her so. He would dance around and try to make her not cry when she was in the playpen. She used to lay on top of him to watch TV when she was little. I wonder if he will remember her when she comes next week.

And as you can tell, he has a thing about pillows for his head.

I just know that my Jack is a very old man now with gray around his eyes and his mouth and a limp to his walk and moves very slow. And he gets cold so easily. But he is still my baby.

And I also know that if Jack does not make it through the night, he has been well loved, brought much joy and laughter to our house and has had been treated with all the love of our hearts to make up for all the abuse and ugliness he suffered in his first three years. My heart is heavy right now as I lay here and watch him breathing and talk to him soothingly. If he has to go, I want him to know I was right here with him. I don’t know if I will tell you tomorrow that wonder dog is gone or if he is still with us. I have decided that the Lord knows what is best. I do not want him to suffer.  I am just thankful to be able to lay here touching him and talking to him.  I am going to lay back with my arm off the bed touching him and try to rest some. It is going to be a long night. Will write more later.

30 thoughts on “Wonder Dog Is In Bad Shape”

Serenity In A World Gone Mad

Wonder Dog Has Left Us 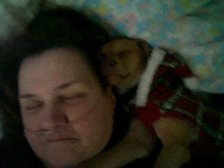 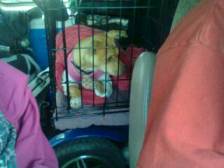